This might at first sound like the stuff of fantasy, but Konyukhov has both the experience and the equipment to make his dream reality. The famed traveler and explorer previously circumnavigated the globe in a hot-air balloon, and on Thursday, he presented a prototype solar-powered plane to journalists and interested entrepreneurs at the Skolkovo Technopark. 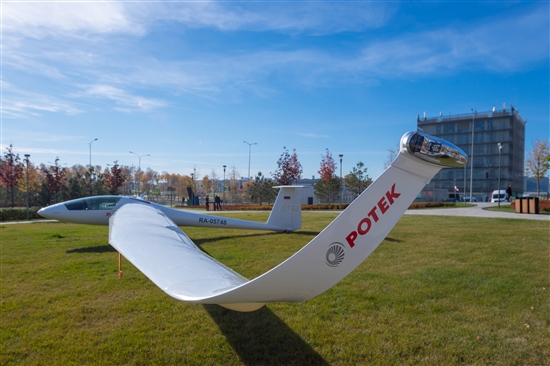 The flying laboratory landed inside the Skolkovo innovation city for the Open Innovations forum. Photo: Sk.ru

The plane at the Technopark is described by the team behind Project Albatross – the plan to perform the world’s first solar-powered non-stop round-the-world flight – as “the first flying laboratory in the field of photovoltaics (the conversion of light into electricity),” and its job is collect as much data as possible from performing test flights, to ensure that when the final product plane takes to the skies, there are as few unforeseen difficulties as possible.

The plane is the result of the partnership between Konyukhov and Mikhail Lifshitz, chairman of the board of directors of ROTEC industrial holding, and uses technology invented by Skolkovo residents. 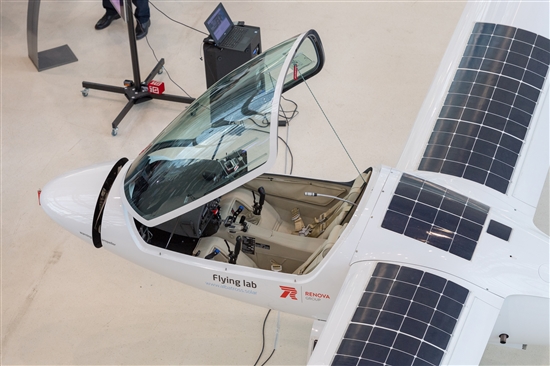 The plane was presented to the public inside the Skolkovo Technopark on Thursday. Photo: Sk.ru.

The flying laboratory is equipped with solar modules that can generate power not only from direct sunlight, but reflected light too. This means the modules can be placed on the underside of the plane’s wings too, increasing its power-to-weight ratio.

The generated energy will be stored using a hybrid storage system consisting of a lithium-ion battery for aviation and a supercapacitor (energy storage unit) module developed by Skolkovo resident TEEMP, which is part of the ROTEC holding. TEEMP’s supercapacitor remains fully functional even at temperatures of below -60 degrees Celsius, and will prevent the storage system from overheating or overcooling.

The flying laboratory began its first flights from the Severak airfield in the Moscow region in July, and will continue to undertake test flights – including long-distance flights across Russia – throughout the next year. 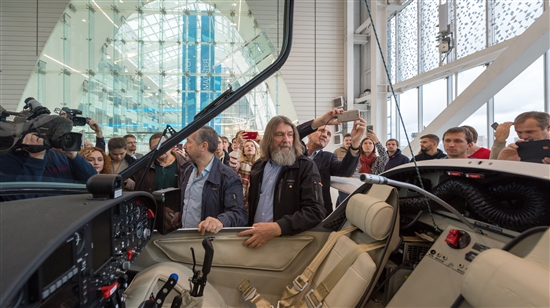 “Why were previous attempts [to fly around the world in a solar plane] not very successful?” Lifshitz explained to Sk.ru during the recent Open Innovations forum, where the plane was also on show.

“Because they lacked calculations. Everything was done empirically. That’s why we’re not embarking on building a large solar-powered machine until we know everything we need to in terms of the electrical technology.

“We are completely removing the element of luck and shamanism from this project,” added Lifshitz, who is himself a qualified pilot. 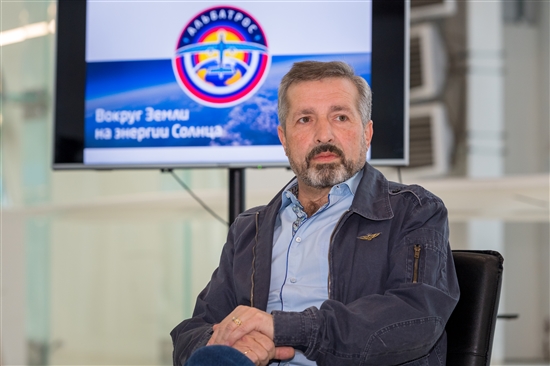 Mikhail Lifshitz, chairman of the board of directors of ROTEC, is himself a qualified pilot. Photo: Sk.ru.

In 2016, the Solar Impulse 2 completed a solar-powered journey around the world that lasted for 505 days. It had been expected to take the solar-powered plane’s two Swiss pilots five months.

The Albatross laboratory plane makes it possible to test various technologies in real climactic conditions, including extreme temperatures, various levels of pressure and humidity, and a wide range of the solar spectrum, its makers say. All of this data will then be used to build the solar-powered plane that will circumnavigate the globe in 2020, when Konyukhov will be 69.

The explorer, who has visited the North Pole and South Pole, climbed Mount Everest and was the first person to sail solo around Antarctica in a sailboat, is currently learning to fly gliders and light aircraft. He plans to take a similar route in 2020 to the one he followed in 2016, when he circumnavigated the world in a hybrid hot-air helium balloon, making him the world’s second person to do so. He already knows the air currents, he told the audience at the Skolkovo Technopark who had gathered to see the futuristic-looking plane. The 35,000-kilometre journey is expected to take him five or six days, travelling at an average speed of 210 km/h at an altitude of 12 to 14 kilometres. 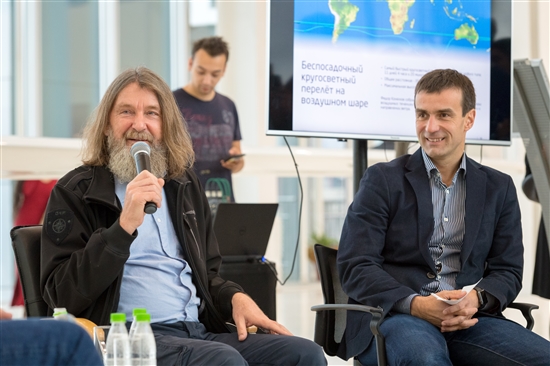 “Skolkovo was set up to help innovators find each other. The result we are seeing today shows that that is exactly what has happened,” said Oleg Dubnov, head of the Skolkovo Foundation’s energy-efficient technologies cluster.

“We see potential for Albatross to become a freestanding product for markets: after all, giants like Google and Amazon are looking for platforms from which to provide services from the air,” added Dubnov, referring to plans by the tech giants to deliver services including high-speed internet from drones and hot-air balloons.

“The best people are here at Skolkovo, and they will lead us into the future,” said Konyukhov.