On September 27, Russian machine builders celebrate professional holiday. In this year one of the leading power engineering companies in Russia, Ural Turbine Works (UTW, part of ROTEC Holding company), completed construction of power generating unit at Ulaanbaatar CHPP-4, Mongolia. This turned out to be the largest constructing project for Mongolian power engineering for the last 20 years. For UTW it was the first export supply of new generation turbines outside the CIS over the past ten years. Mikhail Lifshitz, Chairman of the Board of Directors of UTW, answers the questions from OG. 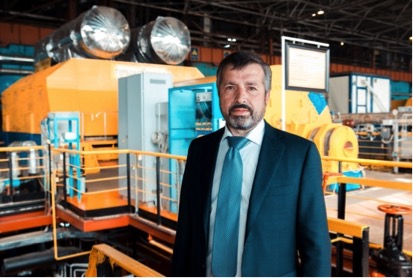 — Mikhail Valerievich, what is the current situation in power engineering?

— The government program on contracts for power capacity supply (a program created to motivate power generating companies for construction of new power units. — OG's note), which were adopted for the last 5-6 years gave a boost to progress in production of new power equipment; major production facilities have been modernized. That is why production plants are in satisfactory condition for today.

But power industry development program was prepared based on economy development forecast. And actual economic growth rate is lower than the predicted figures. As a result we have excess power capacity supply on the electric power market in the amount of about 15-20 GW or 6-8%. Besides, the power generating companies themselves – the consumers of our products, – are in extremely difficult conditions today. The loans for purchasing new equipment have to be serviced. In addition, many companies have loans in foreign currency, while tariffs for electrical and thermal energy are in rubles and fixed. Therefore, despite the fact that current condition of production plants is quite good, the forecast is not encouraging.

In my opinion, the Russian market, in prospect, shall be targeted to modernization of installed capacities rather than to construction of new power generating units.

—How could domestic machine builders replace the power engineering products of foreign corporations?

— The only position in the field of energy equipment on which we have no our own product in Russia — is heavy gas turbines. At the same time in our country we have highly concentrated competencies and capacities to manufacture such equipment. But we have no consistent demand. In order to launch manufacturing of any new product, it is necessary to understand sales forecast for it for at least 10 future years.

— What kind of support in the development of power engineering can be provided by the government?

— Government support is necessary primarily for some new and breakthrough technologies not yet settled in the market. I mean project financing. For instance, we are efficiently supported by the government in subsidizing interest rates on loans for new projects. Thanks to Ministry of Industry and Trade and Industry Development Fund.

I think that we need help in those sectors where we encounter direct competition with foreign products. In particular, economic instruments for subsidizing interest rates on loans can put us in sufficiently equal market conditions as they are for foreign companies. Indeed, if any of my western competitors, who enters a new production facility or a new project, can get the loan three times cheaper, then anyway I can find myself in conditions of limited competitive ability.

— Your production plant has recently implemented a large project in Mongolia, which was named the best Russian export project. What other large projects you are currently working at?

— We plan further working with Mongolia. We also cooperate with Kazakhstan. In this year, three our turbines have already been put into operation at Kazakh CHPPs, and another one shall be commissioned by the end of the year. We completed a small but interesting project in Serbia, and currently we participate in tenders for modernization of CHPPs in Belarus and construction of geothermal power plants in Africa.

The largest one among our projects in Russia – is manufacturing a turbine of capacity 335 MW for reconstruction of power unit at CHPP-22 of Mosenergo. This will be the most powerful heat power generating unit in the world. We believe that it will become the standard-bearer for the new line of our products and allow for upgrading of generating capacities in Moscow and other large cities.

47 steam turbines made by UTW are operated in Moscow. Their total capacity is 7,820 MW (63% of Mosenergo installed capacity). They deliver electric power and heat to 12 mln. people of Russian capital city.