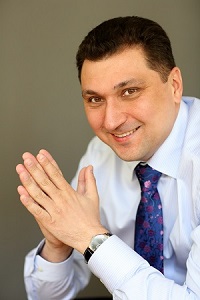 He was born on December 24, 1972, graduated from the physical and technical department of S.M. Kirov Urals Polytechnic Institute and got the degree in “Physical and chemical processes in nuclear engineering”.

His professional life began in 1995 in Yuran Construction Company, LLC. He started working as an engineer of production sector and finished his carrier in that company as its General Director.

From 2002 Ivan held the position of First Deputy General Director of OJSC “Uralkhimmash” being also a Chief of Engineers’ Administration.

From 2005 he worked as General Director of “Prommashtekhnologiya”, LLC.

From 2009 he held the following positions in Rostekhnologii State Corporation:

In June of 2010 Mr. Panasyuk was appointed to the position of Executive Director of CJSC “ROTEC”. Since october 2015 and currently he is Chief Executive Officer of the company. He is a Member of Board of Directors of the Ural Turbine Works.

He is responsible for planning, development and implementation of strategic projects of the company; management of daily and economically feasible operating activities.