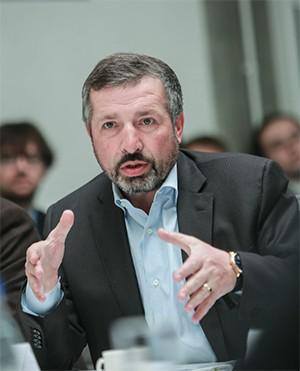 steeped in rich history and robust traditions. Its products are of great strategic importance for the country as they account for about 50 percent of the power of cogeneration turbines in Russia and the CIS.
The first turbine was produced by UTW just before the Great Patriotic War and remained in operation for about 50 years. We met with Mikhail Lifshitz, Chairman of the Board of Directors of ZAO Ural Turbine Works, General Director of ZAO ROTEK, to talk about the history and long-term plans of the plant.

– Ural Turbine Works is celebrating its 75th anniversary. This is a momentous date allowing us to talk about not only about history and achievements but also make plans for the future. There is no doubt that the general programme of the company in part concerns technical upgrade. In this respect, what exactly have you planned as part of the programme and what is the time frame we are talking about?

UTW has, indeed, a lot to be proud of. Over the 75 years of its history the plant has manufactured about 900 steam turbines with the total capacity of more than 62,000 MW. In addition, the plant has supplied over 600 gas turbines with the total capacity of 5,000 MW to Russian and foreign customers. The Ural turbines survived the earthquakes of magnitude 9.0 in the town of Gazli (Uzbekistan) in 1976 and 1978. There are currently 49 UTW turbines in operation in Moscow that almost fully supply the capital's heat and power needs.

UTW steam and gas turbines were awarded the State Quality Mark of the USSR. A team of UTW workers were bestowed the Lenin Prize. And in 1971, UTW workers received the State Prize for the development of T-250 steam turbine.

In 2004, the company was "born again" after joining Renova Group. And after ROTEK was established the plant embarked on ambitious modernization of operations.

The technical upgrade programme was developed and adopted in 2011. During this time we created from scratch new high-speed blade machining operations and purchased state-of-the-art Russian and imported equipment. Modern technologies allow each installation based on three-five high-speed axis machining centers to perform several operations. This complex produces blades of all types and sizes for steam and gas turbines rated from 6 to 250 MW.

We are upgrading the acceleration and balancing stand for high-speed rotor balancing. We have fully modernized the production chain of heavy elements (production of turbine casings and rotors) by installing new boring-and-turning, turning, and boring machines. That is to say that today we are equipped so that in terms of mechanics we can make any turbine in the size range in which we operate, on the level of any world producer.

In addition, we have implemented an automated system for recording working hours, repaired walls, roofs and roads, prepared new premises for the design engineering department and museum, and before the end of the year we are going to install Wi-Fi in all shops to connect CNC lathes to mobile data collection terminals.

Our total investments in UTW over the past few years have exceeded USD 30 million.

This investment programme is already paying off: in 2012, for the first time in fifteen years the plant reached the pre-perestroika production capacity level by producing 8 steam turbines (twice as many as in 2011). And before the end of 2013, we will have produced 12 turbines. And it is quite possible to achieve that – during the first six months we have fulfilled 107 and 117 percent of UTW output and sales plans, respectively.

– Are you planning to launch new production lines and if so, for which products? Do you have brand new developments?

– Of course, we do. The modernization program specifically focuses on production of new high-quality products. As of today, the company is producing not only UTW traditional cogeneration steam turbines, but also new ones: steam turbines for CCGT units, condensing turbines, industrial generation turbines.

The plant has its own design engineering department employing 180 people. 25 percent of them are engineers under 30. This department is responsible for developing design and process documentation for equipment manufactured, production support, engineering service support, installation supervision.

We work with leading engineering companies. Recently, incidentally, UTW has signed a contract with DATADVANCE to implement wheel space optimization and modeling technologies for steam turbines in the plant. That company cooperates with leading European aerospace companies like Airbus, Dassault Systems, and others. And signing of a contract goes to show that the plant is now ready to adopt European level high technologies. Accordingly, the product we are making is at the level of the world’s best standards.

As for examples of new developments, the plant is currently developing new models of steam turbines T-63/76-8,8 and T-40/50-8,8 for combined-cycle gas turbine units. There is a new modified steam turbine for steam power plants with better performance characteristics T-125/150-12,8- 9.

– Does UTW supply its products abroad? What countries?

– Regarding supplies abroad, we are currently re-establishing our Soviet Union-period positions in the traditional markets: we are implementing an ambitious joint programme with Kazakhstan, working with Ukraine and Belarus.

Just recently, we have signed a contract to modernize the steam turbine P-38 for AES Ust-Kamenogorsk CHP (Kazakhstan). We have long-standing relationships with Kazakhstan. Last year, we signed a USD 120 million memorandum with CAEPCO (Central-Asian Electric Power Corporation). In 2012, for the first time in post-USSR history we signed a contract to supply a medium-powered turbine to Ulaanbaatar CHP, Mongolia. By the way, 70 percent of the products to be shipped in 2014 will be exported, mainly, to Kazakhstan, Mongolia, Ukraine, Serbia.

– One of the most serious issues all sectors, including energy, are facing is HR. Every now and then many companies suffer real “personnel hunger”. How do you deal with the recruitment issue in your company? What conditions have you created for your team in terms of social safety nets, training?

– We have put in place new changing rooms for workers, renovated canteens, allocated new premises for the UTW museum. There is a medical station, as well as a technical and fiction libraries in our premises. Employees from other towns are partially reimbursed for their accommodation expenses. As part of the corporate housing programme developed for Renova Group's companies, UTW employees enjoy a discount for purchasing apartments in the new district of Yekaterinburg.

We address the "HR hunger" issue with the aid of the Ural Federal University named after B.N. Yeltsin. In 2004, we signed a contract to train our specialists under a target training programme both in person and in absentia in the department "Turbines and Motors" with a specialization in "Gas Turbine, Steam Turbine Plants and Engines". Currently, there are more than 50 young professionals employed with UTW who graduated from this department.

As for professional growth, one of employee incentives is the Avantgarde Programme adopted by Renova Group. As part of this training, our people are sent to well-known companies all over the world as interns. During training, managers create their own project to be potentially implemented in Renova. As of today, 28 most promising managers from all business units of the group have been selected to participate in this program.

Another effective way to grow professionally is visits organized for our designers to the front-line Western companies. They have the opportunity to get to know modern solutions there and think about how to apply them in the manufacturing of UTW products. Our professionals adopt experience from Siemens, Alstom, Emerson, Moog, etc.

UTW has adopted and is successfully implementing the Mentoring programme. In essence, it is about seasoned foremen sharing their experience with young workers. In return, they enjoy salary supplements. The total of 26 young professionals were trained under this programme.

Finally, we should mention the salary proper. The average salary in our works amounted to RUB 39 thousand this year. In other words, people have an incentive to work.

– It is on record that you engage foreign professionals to work...

– Yes, it is true. For example, we have Pris Harasgama working in UTW today. He is a top-class professional with more than 20 years of experience working in the world's leading machine-building enterprises. He is helping our plant to streamline its production methods. To bring our performance to the level of the world's best companies. To minimize both the production cost and reject rate. To raise output per worker to the European level!

The project was launched in summer 2013 and will continue for one year and a half.

– Thank you very much for the interview! Happy anniversary to you and the whole team of the Ural Turbine Works!