The International Industrial Fair Innoprom-2017 began with a visit by the Russian President Vladimir Putin. Mikhail Lifshitz, Chairman of the Board of Directors, at ROTEC, told the President about the PRANA System used for prognostics and monitoring of the condition of industrial equipment, new turbines for Moscow and nuclear-powered icebreakers made by the Ural Turbine Works (UTW), about TEEMP's supercapacitors, projects of the T Plus Comapny and the Kamensk-Uralsky Non-Ferrous Metal Working Plant.

The PRANA Prognostics System operates in industrial Internet environment, and is a tool for industrial computerization and the implementation of predictive maintenance techniques.

The day before, during the Fair opening ceremonies, Vladimir Putin noted: "We are already implementing a number of computerization projects within the framework of the national technological initiative. Now it is essential to quickly develop, scale up production, generate new markets, propose additional incentives for investments into hi-tech sectors and, of course, continue fostering an investment-friendly environment at all levels: from federal to municipal."

Using predictive mathematical algorithms, the PRANA intelligent prognostics system analyzes all operating parameters of industrial equipment, detecting nascent defects 2-3 months before they lead to an accident. Detecting defects at an early stage, not only helps to avoid equipment breakdown, but also to schedule maintenance, thus helping to reduce related costs by up to 20%. ROTEC's new development is already capable of ensuring the technical reliability of all the equipment of the Combined Cycle Gas Turbine unit. The stand showcases modules that analyze the condition of gas-booster compressors, gas turbines, heat recovery steam generators, and steam turbines. 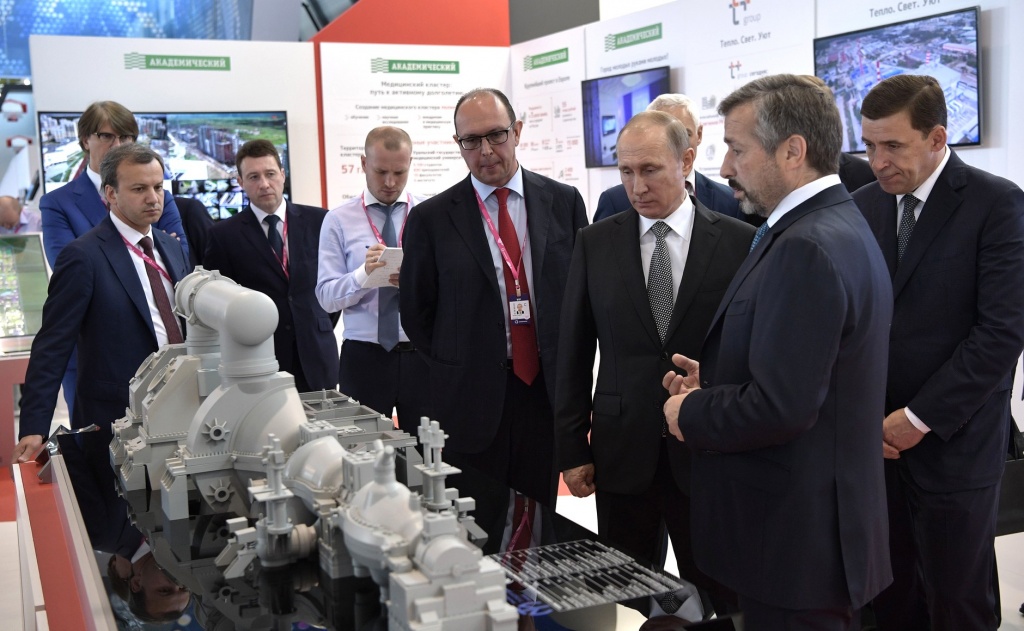 In addition, Mikhail Lifshitz told Vladimir Putin about the T-295 turbine. This is the first Russian "out of the box" turbine furnished with all necessary equipment to connect to the PRANA Prognostics Systems. The electric capacity of the Т-295 turbine is as high as 335 MW. This is the world's most powerful cogeneration turbine, in terms of steam bleed performance: it is capable of providing heat to over 100,000 households. The UTW's new machine is designed to replace the T-250 series turbines, which have been installed in large cities of the country since the 1970s. In more than 40 years of exploitation, the T-250 turbine has proven to be a reliable and efficient machine, however, in the coming years, the turbines of this series will reach their ultimate life spans — and the T-295 will become a worthy substitute. The first turbine of this series was manufactured by the Ural Turbine Works for Mosenergo's CHPP-22. The turbine was brought on-line in February of this year.

The Ural Turbine Works also presented the original blades of steam turbines for the new-generation Russian icebreakers. The Arktika series nuclear-powered icebreakers are capable of breaking ice up to 3 m thick, and guide the vessels with the load-carrying capacities of up to 100,000 tons. High maneuverability of icebreakers is ensured by an electric propulsion system — screw-propellers are set in motion by electric motors, the power for which is generated by the ship's power plant, operating on two steam turbines, created using UTW technologies and developments. The capacity of each of these is 36.5 MW, which is sufficient to provide 2,500 households with electricity.

TEEMP, which is part of the ROTEC Holding, is also showcasing its unique developments at the Innoprom-2017 — supercapacitor cells and high-efficiency current sources created on their base. A supercapacitor is a promising new type of accumulator, which can efficiently accumulate and provide charges of great capacity. TEEMP's supercapacitors have a service life of 1 mln cycles, and retain full functionality at temperatures ranging from +85 °С to -60 °С. Thus, TEEMP's starter module can easily replace 4 tank accumulators, and can start the engines of heavy machinery 4-6 times in a row, even in harsh frost conditions. The availability of an efficient starter device will help Russian Railways reduce diesel fuel consumption by 15% (today, at temperatures below +16 °С, shunting diesel locomotives are never shut down). For public transport, TEEMP's start-stop systems allow savings of up to 10-15% on fuel, compared to conventional internal combustion engines, in hybrid and electric applications — as they extend the service life of storage batteries by 1.5-2 times.

Another energy security-related project of the Holding is the Gas Turbines Hot Path Repair Center. Opened in May 2016, it has become the first Russian enterprise combining equipment, technology, and competences for a full repair cycle of hot path parts of foreign gas turbines. Previously, all such works had been carried out exclusively abroad. The creation of such an enterprises removes the dependence of the country on foreign supplies, and enhances national energy security. Visitors to the stand of the Sverdlovsk Oblast will be able to see the second-stage blades of the gas turbine, before and after undergoing repair procedures at the Center.