News subscribtion
RU
Close
25 June 2019 year Step back to catch up
“We need to build solar parks only when there is no space left on the rooftops”, writes Mikhail Lifshitz, co-owner of the Russia-based ROTEC JSC.

We need to build solar parks only when there are no more square meters left on the rooftops, writes Mikhail Lifshitz, co-owner of Russia-based JSC Rotec

The introduction of new construction materials will allow us to return to the principle – “We shall build solar parks when the roofs run out.” 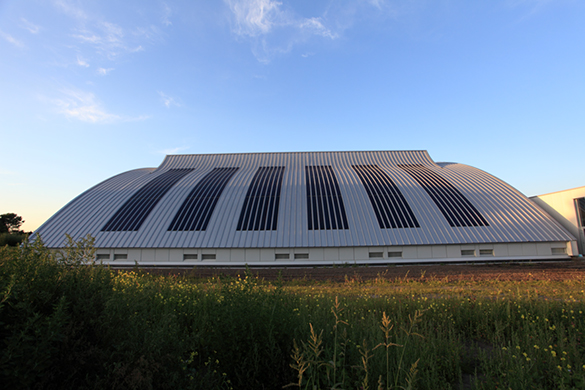 
As part of the state program to support renewable energy sources in Russia by 2024, 1.75 GW of solar power plants will be commissioned.

According to current trends, this build out will likely occur via the erection of large-scale power plants, resulting in 3,600 hectares of land occupied by bulky metal structures, weighing over 63,000 tons. There is also the future dismantling of all these facilities to take into account, which will be deployed outside the city infrastructure, in the fields.

However, in Russia, more than 70% of buildings have flat roofs. This fact raises the question of their more efficient use, considering that modern solar modules can be installed at almost any angle, including on vertical surfaces.

The roof and surfaces of buildings are themselves man-made structural elements already, allowing us to:

Even a preliminary analysis of the existing structural elements, such as the Ikea, Auchan or Spar store roofs reveals that the roofs of factories, power plants and enterprises can provide a huge area for the location of solar modules. The use of such existing spaces will not require new power networks, and power transmission losses will be virtually eliminated.

You can carry out a simple calculation: Today in Russia, 92 Leroy Merlin stores have been built, and the area of these ​​hypermarkets starts from 10,000 m². Taking into account various technical constructions, that leaves 8,000 m² of roof surface on which a solar farm could be mounted.

Overall, there are 736,000 m², on which, taking into account the average Russian level of insolation, more than 117 MW of peak power could be generated. This is comparable to a real gas turbine installation. But in the case of solar modules, you do not need to pay for fuel, network losses and the expensive maintenance of heavy equipment.

Time for a material change?

While it makes sense to install solar on rooftops and facades, the roll out is impeded today by both the industry’s inertness and the current technological features of solar panels.

The first industrial module consisted of two pieces of glass with silicon cells between them, an aluminum frame and a current connection. Therefore, gigawatt-scale factories dragged in with them producers of aluminum, glass and components, and a banking system providing loans with a 25-year guarantee for solar modules. An entire industry has emerged, which has become slow and unreceptive to technological innovations.

Cell performance keeps increasing gradually, but constantly. However, for 30 years, the structural element itself has not changed – solar panels made using glass have a narrow range of placement angle relative to the sun, in particular, because glass reflects sunlight strongly and glare-free glass is too expensive.

When the required angle of inclination is reached and the whole structure is placed on the roof, it is necessary to provide a ballast section that guarantees the stability of the entire system against wind load. Designed according to European standards, the construction with modules and ballast section will lead to additional pressure on the roof of about 180 kg per square meter, which of course was not considered when areal roofs were designed. When installing such systems, damaging the roofing membrane’s integrity is inevitable, for instance.

It is also worth noting Elon Musk’s initiative of embedding solar modules in tiles, and perhaps this method has the right to life. But here a number of flaws are obvious, such as a large percentage of unproductive areas, a huge number of connectors and connections, and overall design complexity. Indeed, Tesla’s tiles cover each other, partially overlapping the surface and require wires and connectors. All these differ them from modern solar modules made of composites.

The situation in the solar industry is similar to the story of the aviation industry. For the last six years, we have seen the widespread distribution of composite materials within large aircraft. Remarkably, the first full-composite aircraft for small aviation was manufactured by the German company Grob Aircraft in the 1980s. Almost 30 years passed before composites proved their right to life in large-scale aviation.

By analogy with aviation, inquiring minds in the sphere of solar energy continue their experiments. It was decided to put a solar panel on movable property, for example, a boat.

But realizing that with glass you will not get far, they started working with composites. With gradual involvement of new materials in various industries, more and more companies and scientific organizations are starting work to improve their properties. This includes the production of watercrafts, airplanes, household electrical appliances, outdoor furniture and windmills.

Today we can say that composites have come to the PV industry and are going to dramatically change its appearance, returning it to its original purpose – to become an affordable and flexible alternative to conventional energy.

The composites industry has learned to deal with ultraviolet degradation, and the strength of acrylates is able to compete with a glass surface in terms of abrasive wear. And just like in other industries, we can play the visionary and say – at the moment, not just one trend is forming that is associated with an increase in efficiency and lower prices for PV inverters, but another one, too – the arrival of new materials.

They make it possible to lighten many-fold the specific weight of solar modules and install them on various surfaces. A deep systematic approach and industry cooperation provide additional opportunities for large industrial and commercial objects, which imply a membrane soft roof, the development of structures with solar modules built into the roofing membrane.

It is composite materials that will return solar energy back to the turn leading into distributed generation, which it has thus far managed to miss. The introduction of new construction materials will allow us to return to the principle – “We shall build solar parks when the roofs run out.”