The Siberian Aeronautical Research Institute named after S. A. Chaplygin has presented its advanced development – aircraft TVS-2-DTS at the International Aviation and Space Salon. 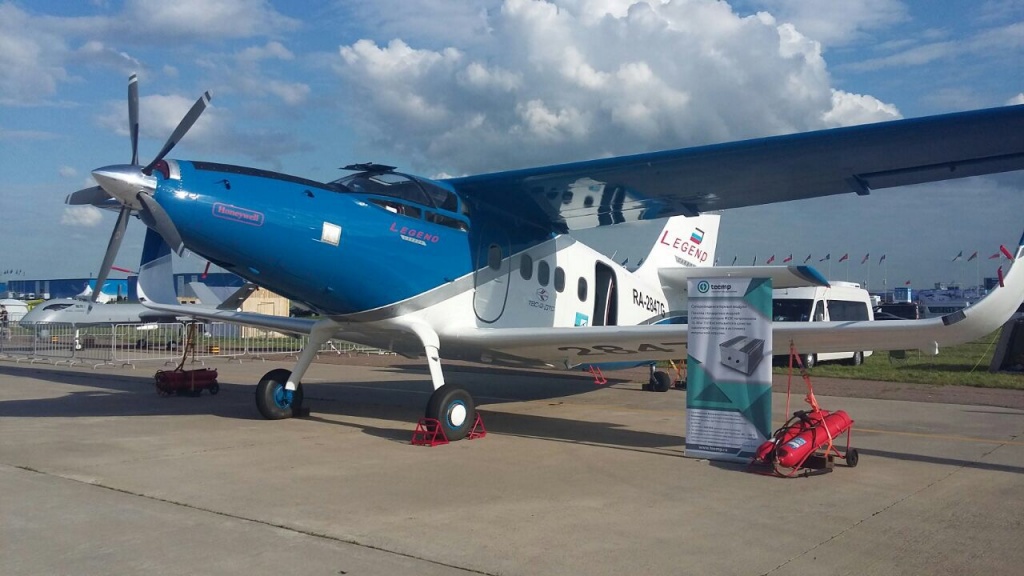 By its outline it resembles the An-2 biplane well-known to everybody since childhood, but this is where the similarity ends. TVS-2-DTS became the first Russian aircraft with an all-composite fuselage and air frame.

The use of new materials increased the aircraft's strength and allowed it to stop by using the bracing trusses and the struts. The rigid construction of the upper and lower wing allows to install additional fuel tanks with a capacity of 3,500 liters, which significantly increases the flying range. Digital simulation methods were applied in the course of the aircraft design, which allowed the Siberian Aeronautical Research Institute designers to create an optimal aerodynamic configuration.

The world's first turbo-propeller engine start-up system based on super-capacitors became one of the innovations. This device developed by TEEMP operates on the basis of a hybrid power accumulator: the super-capacitors ensure the power that is necessary to start the engine while the batteries are used to supply power to the on-board aircraft electrical system. Thanks to the TEEMP technologies, the overall weight of the accumulator is reduced by 60 kg and the batteries service life is increased by 2-3 times. The start-up system based on super-capacitors remains functional at temperatures of up to -50°C, while the traditional batteries lose their charge already at -25°C.

In order to participate in MAKS-2017, the aircraft has made a non-stop flight from Novosibirsk to the near-Moscow Zhukovsky airport.

The Chairman of the Board of Directors of TEEMP Mikhail Lifshits says: "We are pleased to be able to participate in the creation of this undoubtedly unique and promising project. Its technical part is made at a state-of-the-art level of aviation science. The TEEMP super-capacitors are used here along with composite materials, digital technologies and talented engineering solutions. The new biplane may become the basis for qualitative renewal of the regional airlines aircrafts and the technologies applied in it may become a new standard in aircraft engineering".

"TVS-2-DTS is designed to replace the legendary An-2 aircraft. Therefore, in the course of designing it, we relied on the best technologies on the market. The super-capacitors have become an excellent solution for reliable starting of the engine. They do not need maintenance and their service life reaches 1 million discharging-charging cycles. This is extremely important for the aircraft designed to operate in most severe conditions - from the Siberian oil fields to the northern latitudes”, pointed out the Director of the Siberian Aeronautical Research Institute named after S. A. Chaplygin, first class research pilot Vladimir Barsuk.

"Modules based on super-capacitors used as start-up devices are in great demand in aviation and helicopter technology thanks to their compactness, reliability and resistance to extreme climatic conditions. Super-capacitors may be used as a backup or emergency power supply for opening doors, starting engines, activating cartridge-actuated devices" – said the Director General of TEEMP Sergey Kurilov.