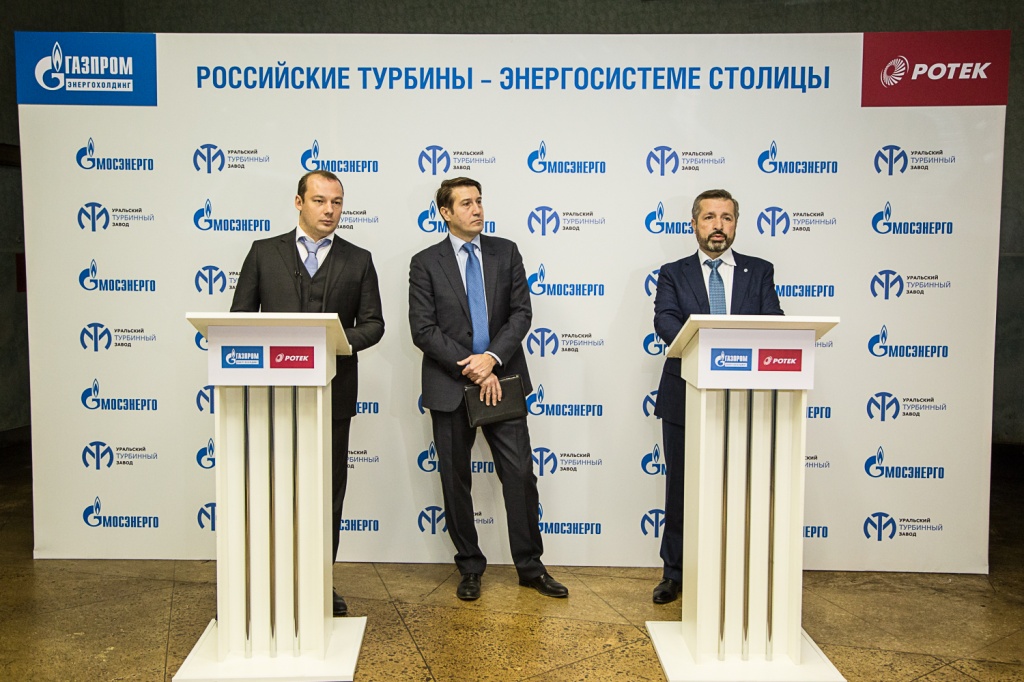 Today at CHPP-22 of Mosenergo OJSC a signing ceremony of the Memorandum of cooperation between Gazprom Energoholding LLC and ROTEC CJSC in order to execute the contract for reconstruction of power unit No. 9 at CHPP-22 was held. The document was signed by Denis Fedorov, member of the Board of Directors of Mosenergo OJSC, Director General of Gazprom Energoholding LLC and Mikhail Lifshitz, Chairman of the Board of Directors of Ural Turbine Works CJSC, Director General of ROTEC CJSC. The event was participated by Vyacheslav Kravchenko, Deputy Minister of Energy of the Russian Federation.

The contract for provision by Ural Turbine Works CJSC (incorporated into ROTEC CJSC) of the full scope of works on reconstruction of power unit No. 9 at CHPP-22 of Mosenergo OJSC includes replacement of main and auxiliary equipment of the unit before September 1, 2018. The old turbine T-250/300-240, being in operation since 1972 with worked service hours equal to 280 ths., will be replaced by the newly installed turbine, new model T-295/335-23,5.

Four-cylinder turbine Т-295 which is to be specially manufactured for this project, will become a turbine of the highest capacity ever produced by Ural Turbine Works. Its maximum capacity can reach 335 MW. This turbine is the latest development of the Russian turbine construction school.

“In terms of design solutions reliability and technical characteristics this type of turbine can be recognized unique and unparalleled anywhere in the world. Turbines Т-250 which were designed and manufactured by Ural Turbine Works about 40 years ago are still in operation. Along with that, in the coming years some of turbines Т-250, which are operated at power plants of Mosenergo, will reach their ultimate life. In this regard we made the decision to start a pilot project for replacement of this turbine on power unit No. 9 at CHPP-22. Of course, the introduction of new types of equipment involves some risks, but I believe that successful implementation of this project will become an important step in development of the Russian power engineering", — said Denis Fedorov, Director General of Gazprom Energoholding LLC.

“Turbine Т-295 is a new product by Ural Turbine Works, developed on basis of turbines Т-250 involving modern solutions in the field of turbine construction, as well as up-to-date design and modeling techniques. I believe that this product will became a leader of the new product line and take rightful place not only in the energy system of Moscow but also in other cities with million people population. The team of Gazprom Energoholding and, in particular, of Mosenergo, came to the quite serious decision to install a pilot model of the new turbine at CHPP-22, having given credence to us and assigned a great responsibility, and we are going to justify this credence”, — said Mikhail Lifshitz, Director General of ROTEC CJSC.

Cogeneration steam turbine T-250 which has to be replaced is the first of 19 turbines of this family, manufactured by Ural Turbine Works in 1970-1980 especially for power plants of Mosenergo. Turbines T-250 are the main energy sources within the structure of Moscow heat supply system. Their total capacity is 40% of the overall installed generating capacity of Mosenergo. The first three turbines T-250 were put into operation in the 1970-s exactly at CHPP-22.

Ural Turbine Works CJSC — is one of the leading machine-building plants in Russia that designs and manufactures power equipment which specializes in manufacturing of steam turbines, as well as in maintenance service and modernization of stream and gas turbines.